Voted: BEST PLAY from Thespis Theater Festival 2014
Depression Era, Lower East Side, Manhattan.  Mrs. Chaste, a demure author of children’s books, is banned by a corrupt Pastor Beagle as her stories depict the supernatural - and because he is her husband’s lover.  Chaste befriends Damian, the neighborhood devil whose quest is to free her from censorship.  Their affair inspires Damian to consider returning to the living.
Thespis Theater Festival
presents…

The Devil of Delancey Street
~ A Musical in One Act ~

The Devil of Delancey Street depicts Lower Manhattan in the 1940s, a once rich, high-rent shopping district turned slum after the Depression. Jewish settlements and Christian societies disintegrated as residents in the Lower East Side lost faith in a God that would not take care of them. Crime rate and gang activity rose exponentially. Schools closed and inhabitants fled fearing the neighborhood had become possessed by the Devil.

Inspired by “Angels,” Mrs. Mary Chaste writes children’s books which are banned by the church as being immoral. Penniless after her husband’s death and frantic to provide for her daughter, she turns to the streets. Kidnapped and held hostage in “a place so dark not even heaven can see” angels must call on the help of Damian, the neighborhood devil to seek her out and watch over her until her true enemy is revealed. Their relationship inspires Damian to ask the impossible; to be made flesh, a miracle granted only once before in the history of man.

REVIEW BY MARTIN DENTON, NYTHEATRE.COM, October 20, 2005.
"The Devil of Delancey Street is the latest musical from the quirky and singular theatre auteur Sharon Fogarty. A little rough around the edges and feeling not quite fully baked, it is nevertheless a charmer—a smart, sassy, wickedly subversive piece with lots on its mind and lots of unabashed heart. It tells two interlocking stories. One is about Mrs. Mary Chaste, a woman in her 40s whose husband has died leaving his vast fortune to the church run by the corrupt Pastor Beagle. Now suddenly destitute, Mrs. Chaste and her 16-year-old daughter Grace find their way from their former Long Island home to the scrappy Lower East Side of Manhattan. Just as they are getting themselves established, Mrs. Chaste is abducted and brought to a brothel, where she is tied up in the cellar. Grace seeks assistance from Dr. Pang. Will they be ab

le to find Mrs. Chaste? Will Mrs. Chaste escape from the whorehouse?  The second story concerns Damian, who is, quite forthrightly, the devil of the show's title. When we first meet him, he's doing his evil deeds right here in Delancey Street. But after he encounters Mrs. Chaste—and subsequently comes to her aid in her basement prison—her spunky spirituality leads him to question if he might not wish to be an angel instead. Two actual angels—Sarafina and Malachi—watch over and then abet his transformation, from heaven.

The ideas in Devil are familiar from previous Fogarty outings: organized religion is a haven for hypocrites, sexual repression is unhealthy, free expression is to be valued above all (Mrs. Chaste scandalized her husband by writing scary horror stories for little Grace, which the church censored and suppressed). Fogarty's idea of God is not exactly traditional; it reminds me of E.Y. Harburg's, the One who, in the song "Necessity" from Finian's Rainbow, says "go out and have fun." Fogarty's Lord is similarly loose and unconventional in His thinking: devils can become angels if they fall in love, evil pastors (Beagle is conveniently bisexual—and plenty horny—in his eager pursuit of the almighty dollar) can be defeated with a rousing anthem entitled "Now That's Fucking!"

The play is full of the offbeat humor and songs that are Fogarty's trademark. There are some really wonderful and original theatrical notions in it, notably the character of Delia, a telephone operator who is, apparently, everybody's secretary (Beagle's, Pang's, Damian's—even God's). Bradley True's hairdo as Pastor Beagle is a delicious visual joke. And there is at least one gloriously transcendent sequence, the one in which Mrs. Chaste and Grace earn money on Delancey Street by selling songs and poems to the passersby. Fogarty is the show's director as well as its librettist-composer-lyricist, and also its star (as Mrs. Chaste). She's unwavering in her artistic vision here, as ever. Joining her on stage are some of her frequent collaborators, including the invaluable Karen Christie-Ward as Delia and Matthew Porter as the kindly Dr. Pang. New to Fogarty's world (and indeed to the New York stage, for he's emigrated here from England) is the formidable John Cunningham, who acts and sings Damian beautifully. Peter Dizozza plays accompaniment from stage left on a tiny keyboard, providing appropriate continuity and underscoring that's the glue holding together Fogarty's smart but fanciful tale. (Photo: John Cunningham as Damian). 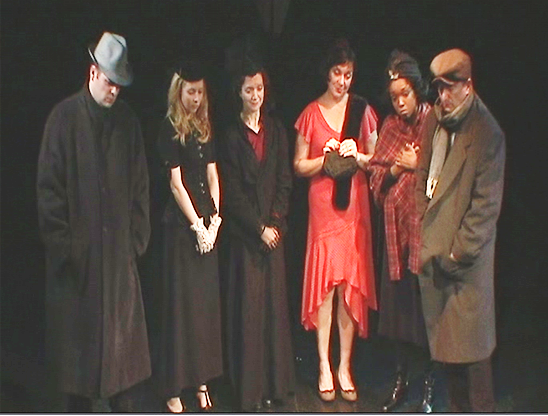 NY Times Editorial Review:  "See it!", November 3, 2005 by J.Grossman
"Loved this show! How can a dark romantic musical comedy about a devil on the Lower East Side during the depression work? Wonderfully. With a minimalist set and inventive scenery, this inspired show soars from the opening musical number. A great blend of musical influences highlight the suspenseful tale of love, life and survival. Playwright Sharon Fogarty shares the stage with her talented co-stars including John Cunningham, Patti Goettlicher, Bobbi Owens, Jeffrey Plunkett, Matthew Porter, Bradley True and Karen Christie-Ward. Rarely do actors convey such affection and respect for their material. They're obviously having a grand old time with this production. Bold commentary on religion, depression, addiction and art rings out without being heavy handed. Be one of the select crowd that can lay claim to have seen this production before it gets to Broadway! You'll want to see and hear this one again and again. You'll leave singing for more."

Peoples Critic by David Dow Bentley III.
"Fogarty gives us a pleasant performance in the lead role of Mrs. Chaste, an author of children’s books full of ghosts, witches, magic and mysticism. Though angels may have inspired her writings, the church has banned the books as immoral. Recently widowed, she learns her late husband has left his fortune to the church of the pompous and condescending Pastor Beagle (played with effete and over-the-top excess by Bradley True in pigtails). Mr. Chase, it seems, had an oddly close relationship with the pastor. Thus, Mrs. Chaste and her “bastardess” daughter, Grace (sweetly played by lovely, and vocally talented, Patti Goettlicher) are left impoverished, and take to the streets to sell personalized songs and poems to passersby. Along the way Chaste receives therapy and depression medication from Dr. Pang (Matthew Porter). Enter the devil, coolly portrayed by experienced British actor, John Cunningham. He has a smooth, rich voice for dialogue, and he reminded me more than once of the elegant vocal cadence of the late James Mason.
Frequently presiding center stage, with arms outstretched, is actress Karen Christie Ward as Delia, the mystical switchboard operator who helps connect the conversations of these many characters from heaven, hell, and in between. Christie inhabits a number of other minor characters, bringing to each a new and focused sense of body language and facial contortion that hints of her versatility.
With perhaps a touch of Nathan Lane in his performance, Mr. Porter also portrays the zany artist, Vincent Vanbleau. Jeffrey Plunkett and attractive, sweet-voiced Bobbi Owens are the heavenly angels who must deal with this devil as he tries to free Mrs. Chaste (he clearly has “a thing” for her) from a questionable underworld into which she has somehow fallen.  While book, music, lyrics and direction were by Miss Fogarty, Musical Director, Peter Dizozza, provided pleasant incidental music before and after the performance, and never overwhelmed the actors with his unobtrusive accompaniment while skillfully presiding at keyboard during the show. Fogarty gives us titles like “Go to Hell,” “Go Back to Being a Whore,” and “Now That’s Fucking.” "This is Life Upon Delancey Street,” had a warm ensemble chorus and sweet harmonies that nicely reprise to close the show. “Let Us Pray,” had a pleasant melody, and “Songs and Poems,” had intricate and satisfying counterpoints.